Epson Projectors showed strong resolve to enter the higher lumen and digital whiteboard space with an impressive booth.  On the business and professional side, their touch-screen Brightlink Pro technology paired with short throw projectors attracted big crowds while demonstrating the quality of image between 3LCD and DLP projectors.  On the cinema side, Epson showcased their new line of Powerlite laser cinema projectors, like the LS9600e and LS10000 (4k resolution).

Christie Digital was also at the show in full force with a 30,000 lumen 3 chip DLP projector called the Boxer 4k30.  At less than 150 pounds, the Christie Digital Boxer 4k30 positions itself at the forefront of rental and fixed applications including projection mapping like the show at the Air Canada Centre. 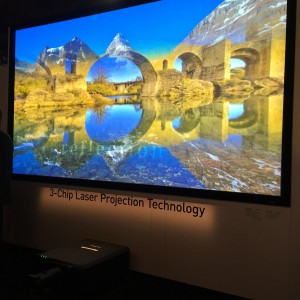 Traditionally, projector limitations such as low lamp life, noise, heat, and low resolution have given way to LED walls and other flat panel type displays for commercial applications such as digital signage and exhibition showcases.  This year saw the introduction of lightweight, high brightness, and high resolution laser projectors.  Laser optical engines are considered to be more reliable light sources, and up until this year, were only available in low brightness or low resolution modules.

Panasonic’s PT-RQ13K is a 3-chip DLP laser projector with 4k resolution that has the potential to make waves in the projection industry.  At less than 100 pounds, it is the lightest in class and at 12,000 lumens brightness, it is the brightest in class. With an ultra-short throw lens, it is capable of casting a 150 inch image at just 4 feet away from the screen, making the projector a strong candidate for digital signage and advertising, particularly in indoor spaces.  Its twin laser light source is rated for continuous use, up to 20,000 hours, and its liquid cooling system means virtually no noise.

What does this mean for the projector industry?

The introduction of liquid cooling will mean less noise and better circulation for incredibly hot projector components, meaning less breakdown and maintenance.  Laser light sources mean longer projector life with no painful bulb replacements and 4k resolutions mean larger and sharper displays, all at a cheaper price.  Ultimately, the crux of these developments will lead us to high brightness displays that can project onto any surface to create lifelike, 3 dimensional projections in any light conditions.

Nothing at this year’s NAB caught us off guard, but there were a number of pleasant surprises in the industry.  While reliability and affordability of products negatively affects our company’s profitability as a repairs depot, we believe that the industry is making strong steps that will ultimately lower the barriers to entry for broadcast quality production, and we think that this ultimately benefits all of us consumers.  After all, doesn’t your life look cooler in 4k shot from an aerial drone?