This year’s National Association of Broadcasters (NAB) conference brought together 1,789 exhibitors and over 100,000 guests at the Las Vegas Convention Center to see the latest and greatest in broadcast hardware and software.  Exhibitors brought their latest and greatest Audio/Visual technology to showcase, some evolutionary and some revolutionary.  While we can’t cover all of the exhibitors, we will do our best to share some of the show highlights that we found relevant to our industry and readers. The Freefly Alta UAV is an industry leader, capable of carrying a 15 pound payload like the RED Dragon

By taking a step into this year’s NAB, it should be obvious that automation and robotics are taking over the broadcast industry.  The first five or so booths in central hall were of companies specializing in Unmanned Aerial Vehicle (UAV) type drones.  These companies seemed to specialize in the production and sale of the drones, as well as the specialty gimbals used to create smooth panning shots.  Drones ranged from $1000 with built in GoPro type cameras, to $50,000 plus for drones designed for heavy payloads like the Red box cameras with detachable lenses.  DJI was present with their well-known Phantom drones, and Yuneec Aviation technology was showing off its new Yuneec Tornado designed to support the Panasonic GH4 camera system.  On the higher end of the spectrum, Freefly was showcasing the Alta drone capable of a 15 pound payload, which is enough for a RED Dragon with lens.  At $8,495, the Alta isn’t cheap, but it can rival shots from actual helicopter ride shots. Replacing camera operators with robotics, isn’t a new trend.  Panasonic has long dominated the robotic camera for broadcast space with its line of Pan Tilt Zoom systems.  The AW and AK series cameras, heads, and controllers have been a favorite among churches, broadcasters, and sports networks due to their reliability, programmable pans and tilts, and ease of use.  This year, Panasonic introduced a new 4k box camera, the AK–UB300 which can be mounted on any of their Pan Tilt heads.  The AK-UB300 is controlled externally and is capable of using 2/3” lenses, recording at 4k resolution at 60 frames per second.  This could mean incredible leaps in the way we stream sporting events.  Combined with media servers like the CANVAS from Immersive Design Studios, we could see real-time streaming events on absolutely massive displays.

In addition to standard all-in-one broadcast PTZ systems like the ones from Vaddio, Sony, and Panasonic, we are seeing 3rd party companies emerge that specialize in just the robotics.  Mark Roberts Motion Control is a British company making its debut in the US with their line of robotic heads and studio automation tracking software. Models like the AFC-100 and the AFC-180 offer super precise tracking for studio and outdoor applications.  Sometimes a production requires tracking too.  For this type of project, there’s BlackcamSystem which offers a movable track with multiple camera mounting options.  These types of solutions can be incredibly appealing over traditional PTZ options as they provide a camera and lens agnostic solution. 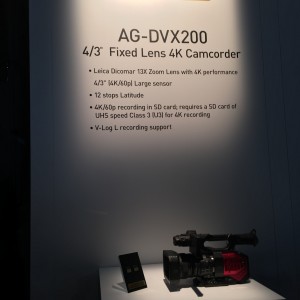 4k resolution this year was an absolute minimum for camcorders.  Both Sony and Panasonic had strong additions to their 4k Lineups.  Replacing the PMW series for Sony is the PXW series including the detachable lens PXWFS7 and the prosumer PXWX70 and PXWX180.  For broadcasters, the PMW320 and PMW500 have been upgraded to the PXW320 and PXW500, respectively.  Sony has also added a 4k, ultra high framerate camcorder for sports broadcasters called the HDC4300.  (Note: in order to shoot 4k on the HDC4300, you need to install the optional SZC-4001 software)

For Panasonic, we saw the resurrection of a legend, the Panasonic AG-DVX200 (a throwback to the legendary AG-DVX100 which started the handheld camcorder revolution ten years ago).  This camera is sure to be a crowd pleaser with its ability to record 4k/60p to an SD card and 13x optical zoom with built in Leica lens. Panasonic had additional improvements to its varicam lineup, including the varicam 35 which uses a 35mm sensor to replicate the feel of film and users should see massive improvements in low light performance.  In their demo, Panasonic’s Varicam 35 was able to handle a candle-lit scene incredibly well.

Red Digital Cinema also made waves with their new 8k sensor: The Weapon.  This modular box camera just keeps getting better and better, and the ability to upgrade the camera offers some serious upside when comparing the Red to Sony and Panasonic’s competition.