Last Sunday, 161.3 Million Americans tuned in to watch the Super Bowl on NBC.  With the big game aside, many tuned in for the spectacular Half-Time performance by Katy Perry and her now sensational Left Shark.  Viewers were delighted by the visual representation of a tropical paradise, 3D fireworks, and a super realistic Chess Set projected on stage using a technique called Projection Mapping. 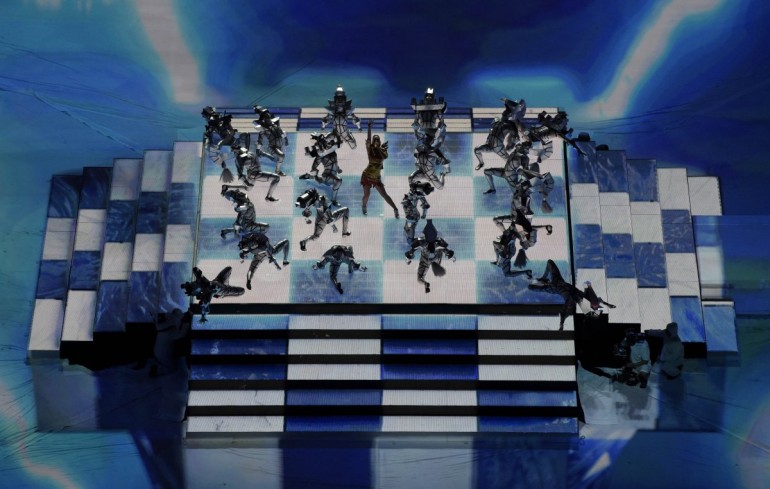 What is Projection Mapping?

We first saw Projection Mapping hit the mainstream at Coachella 2012 when performers resurrected Tupac for a surprise performance.  By using multiple high-brightness projectors, uneven surfaces, and intense pre-rendered or-on-the fly rendered graphics, artists are fooling the human brain into the illusion that the 2D projection is actually a 3D object with holographic tendencies.

When it comes to live venue projection, especially in challenging or bright venues, Barco seems to dominate its competition.  In 2012, Barco FLM HD20s supported international events including Roger Waters’ The Wall, the Eurovision Song Contest, and the Bacardi Togetherness worldwide brand campaign.  It is rumored that for the 2015 Super Bowl, 80 Barco HDF-W26’s were chained to produce Katy Perry’s half-time show.  The projectors were set up redundantly in pairs to prevent blackouts in case of failure. The HDF-W26 is a 26,000 lumen DLP projector from Barco that is designed for Projection Mapping applications.  It is out of the box ready for projecting on to warped surfaces, connecting to multiple other projectors in a series, and is ruggedized and weather-sealed.

Who Runs the Show?

In order to understand more on projection mapping, we sat down with Eric from Imaginex to talk about the intricate details of Projection Mapping projects.  His company, Imaginex specializes in displays and shows on the East Coast including Virginia, Maryland, and New York.  According to Eric, Projection Mapping is a foreign concept to many entertainers, and entertainers often hire a firm that offers a Turn-Key solution.

“We offer an end to end solution.  Depending on what the client is looking for, we would provide the system control software, select the media servers and projectors, and set up the rigging.  We would even find animators if that was part of the project.”

What are some of the challenges with Projection Mapping?

It seems that every show can be as simple or as complex as the plan calls for.  When working with 2, 50, even 100 projectors, you can imagine how complex the computing power can be.  Owning this type of equipment is prohibitively expensive, and so it is important to find a rental company with reliable equipment.  As we know at Digitron Electronics, poorly maintained projectors can suffer from power issues, blown lamps, and bad power supplies all the time.  We asked Eric from Imaginex about the biggest concerns:

“Things can always come up last minute – power issues, the 3D model doesn’t fit the stage perfectly, or there are issues with the hardware.  We’ve always got to be ready for last minute problems.”

Digitron Electronics is a repair center for high-lumen large venue projectors, and we frequently work with Barco, Christie, Digital Projection, Mitsubishi, Panasonic, and Sony Projectors.  We often work with rental companies that provide Projection Mappers with their equipment, and we work with projection mapping companies who own their equipment.  From our experience, large venue projectors like the Barco FLM-HD20 are in need of constant preventative maintenance, especially since their standard lamp life is less than 1,000 hours, and they rely on a complex liquid cooling system.

Not a Projection Mapped Shark

**Disclaimer: The Left Shark is not projection mapped